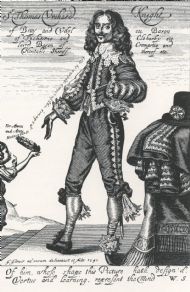 Sir Thomas Urquhart is in exile away from his beloved Cromarty and dreaming.  Thanks to modern science you can meet him sitting at a desk near the entrance to the museum and hear his dreaming monologues, or you can read a summary of them here.

Summary of the ten mini-soundscape monologues in English

In this series of monologues, we meet Sir Thomas Urquhart, eccentric genius, laird of Cromarty and owner of the large mediaeval stone castle which preceded Cromarty House. Imprisoned in 1650 after he supported King Charles I at the disastrous Battle of Worcester, Sir Thomas now sits far away in England, thinking back to his thwarted ambitions for ‘his little town of Cromarty’ from his bleak cell in Windsor Castle. A lifelong monarchist, he was eventually released from prison in 1652, but was allowed only a brief visit home to his beloved Cromarty before permanent exile. By 1655 he was living abroad and, probably to improve his chances of returning home, had even accepted the patronage of Oliver Cromwell, writing government propaganda. Sir Thomas had the last laugh: although he never returned to Cromarty, it is said that he died in Holland around 1660, in a fit of laughter on hearing of the restoration of the monarchy. These ten monologue recordings cover Sir Thomas’s main achievements and obsessions.

Aim: to communicate Sir Thomas’ ambition for Cromarty and how it was thwarted by the magistrates of Inverness

Sir Thomas Urquhart has issues with many authority-figures other than himself. Magistrates are no exception and Inverness magistrates are particularly despised. In the 21st century the City of Inverness may be the Capital of the Highlands but in his captivity over four centuries earlier Sir Thomas imagines his own beloved little town of Cromarty thriving in its stead. In spite of Cromarty’s location on the magnificent deep-water haven of the Cromarty Firth, the canny burgesses of Inverness have the ear of the King, which makes allthe difference. When Sir Thomas dreams, it is always hard to tell whether his imaginings could really have come true or not.

Track 2: On Idling and Industry

Aim: to set out how Sir Thomas hoped to see the townsfolk of Cromarty occupy their time

Sir Thomas clearly cannot abide an idle pair of hands. Here he thinks back to ‘his’ people in the town of Cromarty and all the beneficial activities in which he would have encouraged them to participate: improving farmland, quarrying stone, even prospecting for precious metals. Whether the benefits of such employment would have been greater for Sir Thomas or for the townsfolk is, of course, a matter for discussion...

Track 3–On Learning and Accomplishment

Sir Thomas is a great believer in occupying people’s time beneficially and imagines himself encouraging his townsfolk to excel both physically and mentally. (Given George Ross’s difficult experiences as an improving laird only a century later, it is hard to see the good folk of Cromarty wholeheartedly embracing this fantasy).The fact that many of these activities would have provided Cromarty – and Sir Thomas – with a well-trained body of fighting men cannot be coincidental. Altruism or self-interest?

Imagine the difficulty. Sir Thomas cannot ever seriously have imagined that the Royalists would lose the Battle of Worcester, but they did. He is imprisoned by Oliver Cromwell, first in the Tower of London, then in Windsor Castle. His lands, his tenants, his castle, are in the far north of Scotland. He needs money to pay for food, for clothing, for wine, for bribes. No cashpoints then. Instead he must rely on the good offices of Scots bankers who have settled in London, rich men who (as Sir Thomas must see it) have ‘sold out’ to the enemy who holds him captive. Sir Thomasuses some choice vocabulary to describe their reluctance to advance him any money, but can you honestly blame the bankers?

Collybist is from the Greek for money-changer

Clusterfists means a niggard or a close-fisted person

Joltheid is a thick-head, a word long overdue for a comeback...

Meet another authority-figure with whom Sir Thomas has crossed swords: Master Gilbert Anderson, the local minister in Cromarty. We need to remember that in 1560 the ‘old’ Roman Catholic religion was kicked out in favour of a new Protestant faith: the Scottish Reformation. Sir Thomas still behaves as though he can control the actions of Cromarty’s minister, but this is no longer the case. The pair have an almighty falling-out over the installation of a new pew in what we now call the East Church (which you can visit at the south-eastern end of Church Street) and from that point onwards Master Anderson denounces Sir Thomas from the pulpit at every opportunity.

Track 6: On the Joysof Science and Mathematics

Aim: to communicate Sir Thomas’ love of mathematics and learning

This story illustrates the obsessive quality to Sir Thomas’ quest for knowledge. He tells the tale of a visitor who goes off in search of a day’s shooting and comes back laden with wildfowl and how other guests rib him about not going along too. Something about his response is deeply moving and perhaps suggests a man with an autistic streak. Sir Thomas does not appear to understand that he is being gently teased and cannot see anything at all unreasonable in leaving a guest to go and hunt for duck on his own. Sir Thomas is a polymath: he loves physical science and his many detailed and complex mathematical theories (which once baffled all who tried to fathom them) have been reassessed positively by more recent mathematicians.

Track 7: On His Universal Language

Sir Thomas sees many of the world’s problems as stemming from the lack of a universal language – and so he invents one and calls it his Jewel. The Jewel is a complicated language and has ‘eleven genders, seven moods, ten cases (besides the nominative) and twelve parts of speech.’He loves ornamenting his language, both written and spoken, with different oratorical and literary flourishes. This sometimes makes him rather difficult to understand. Epiphonimas is an exclamation which summarises what has just been said [Ehp-uh-foe-knee-mas]

Track 8: On his Love for Rabelais and Humour

Aim: to illustrate Sir Thomas’ passion for wit and for Rabelais.

As well as excelling at mathematics and inventing a universal language, Sir Thomas fell under the spell of the French author Rabelais and embarked on a translation of his great work Gargantua, which sends up society and those who over-indulge in food and drink in highly entertaining and vulgar ways. While not a literal translation, Sir Thomas’ rendering of Gargantua is still praised for communicating the spirit of the original better than any other. Here is one short introductory section about how humour can lift the spirits:

‘Good friends, my readers, who peruse this book,

Be not offended, whilst on it you look:

Denude yourselves of all depraved affection,

For it contains no badness nor infection:

Tis true that it brings forth to you no birth

Of any value; but in point of mirth;

Consume; I could no apter subject find;

One inch of joy surmounts of grief a span;

Because to laugh is proper to the man.’

TRACK 9: On Genealogy and Heraldry

Aim: to enthuse visitors for Sir T’s own love of genealogy and heraldry and to use and explain one of his long Greek names for his work

Many people today use websites such as Ancestry.com to search for their ancestors. This was fashionable too in Sir Thomas’ day and he, naturally, goesfurther back than anyone else, tracing his lineage to Adam, Eve and therefore by extension to God. He callsthis family tree his Pantochronocanonand hasit with him at the moment of his capture by the Government soldiers after the Battle of Worcester. Horror of horrors, his captors rip his beloved Pantochronocanon into pieces and use it to light their pipes. Pantochronocanon is pronounced Pantokronokanon –short o not long oh.

Track 10: On the Hunting of Witches

The Black Isle was a place where grim accusations of witchcraft resulted in condemnation to death in appalling ways, such as burning alive in a barrel of tar (a woman was burned burned as late as 1727 a little to the north of here). The Sheriffs of Cromarty held the hereditaryright to pursue witches and here a young Sir Thomas acting for his father has two people brought before him who confess that they have been ‘consorting with demons’. Sir Thomas, freshly returned from travels on the Continent with a broadened mind, deals with the tricky situation in a very modern way. He puts the pair up in the castle overnight and uses clever psychology and a tempting trick to reveal that the consorting with demons to which they have confessed is the result of fevered and frustrated imaginations. Sir Thomas not only spares them a horrible fate by his sensitive handling of their case but finds them each a spouse from within his own household. The witch finder must have been livid, and doubtless the outcome made Sir Thomas enemies in the church: it is likely however that Sir Thomas Urquhart would simply not have noticed this - or would not have cared if he did.