It was the promise of funds from the from the Commissioners for Forfeited Estates (estates forfieited from landowners who supported the Jacobites in 1715 and 1745) that enabled George Ross to embark of the building of the Cromarty Courthouse in 1771.  Ross, a very successful Anglo-Scottish businessman, had bought the Cromarty estate in 1767 and set about investing heavily in the town.  By the time of his death in 1786 he had built Cromarty House, provided the town with a hemp factory, Gaelic chaple, brewery, harbour, nail and spade factory and the Courthouse. 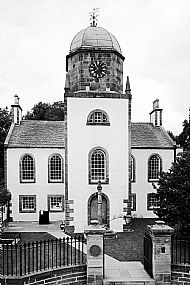 The building itself was completed in 1773, but it was 10 years before the internal fitting out was completed, but once finished Cromarty had gained a

or to use George Ross's words it helped

"to make Cromarty worth and English man's while coming all the way from London to see."

By the mid 1800s attitides had changed towards the treatment of prisoners.  Prisons were placed under the control of the General and County Prison Boards and work began to build new prisons and improve existing ones.  In Cromarty thei meant that between 1845 and 1847 three new cells and an exercise gallery were built.  Accommodation for the jailor and his family was improved, the facilities in the courtroom were upgraded and a new heating system was installed.

Not long after the modernisations were completed Cromarty's economy began to decline and with it the local population.  The building stopped being used as a county prison in 1879, although it was used to house the police cells for a while.  The last use of the cells was during the First World War when Cromarty was an important Naval Base and the cells were used by the Naval Shore Patrol.  The building was last used as a Sheriff Court in the 1930s, although the Burgh Magistrates Court (which tried 'lesser' crimes) continued to use it until the late 1950s.  The building was cold, damp and lacked what was rapidly becoming a necessity - electricity.

After a period of neglect the District Council established the right of ownership of the Courthouse and proceeded to invest in the building and make it part of a more ambitious programme to stimulate economic growth in the town.  The project was to create a high profile heritage site by establishing a Courthouse Museum attractive to locals and visitors alike.  Work began in the late 1980s and in 1991 (the year it opened) the new museum won the prestigious Scottish Museum of the Year Award.

In the 30 years since its opening the museum has continued to expand, to reflect the varied history of the town and its surroundings.  Cromarty Courthouse Trust, in collaboration with others, continues to care for this iconic building to ensure its survival into the future.

To find out more have a look at the Courhouse Guide, available from the Courthouse shop, price £4, or online from Cromarty History Society Publications (price £4 plus £1.50 P&P) 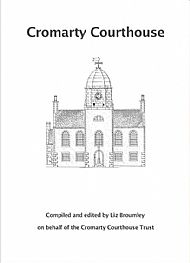